Would you like to learn electronics, with an all-in-one board that has sensors and LEDs built in? Circuit Playground is here - and it's the best way to practice programming on real hardware with no soldering or sewing required!

This is the Classic version of Circuit Playground, which comes with an ATmega32u4. It's designed to be used with Arduino IDE and code.org CS Discoveries only. It even comes with Firmata already programmed in, so you can use it immediately with code.org Discoveries without any preparation or updates.

If you would like to use MakeCode or CircuitPython, check out Circuit Playground Express, which can be used with MakeCode, CircuitPython or Arduino.

Circuit Playground features an ATmega32u4 processor, just like our popular Flora. The board's also round and has alligator-clip pads around it so you don't have to solder or sew to make it work. You can power it from USB, a AAA battery pack, or with a Lipoly battery (for advanced users). Just program your code into the board then take it on the go!

Circuit Playground has built-in USB support. Built in USB means you plug it in to program it and it just shows up.  All you really need is a Micro-B data/sync USB cable - not included! With the new 1.6.4+ Arduino IDE, it takes only a few seconds to add support. The Circuit Playground has USB HID support, so it can act like a mouse or keyboard and attach directly to computers.

Here's some of the great goodies baked in:

Check out our detailed tutorial for pinouts, driver installation, Arduino IDE, and more! 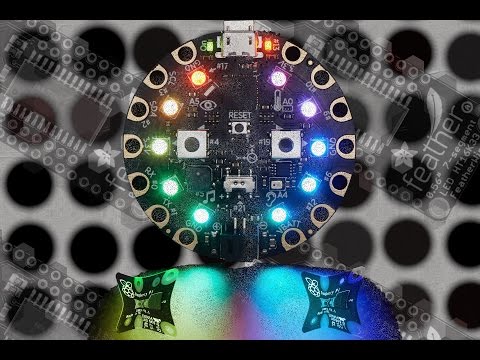